it all started with this or more accurately, with this :


for several weeks, i've been collecting those blogger verification words that look like real words. it's so much more entertaining now that they changed their algorithm and the words look like they might mean something. i find myself constantly scrambling for a pen and paper when i'm surfing the blogosphere, so these words are scribbled everywhere in the house..on the edges of newspaper, in the notes on my iPhone (for those times when no pen/paper were available), i even started a document with a bunch of them in it, but mostly, they're scribbled here, along with phone numbers and movie seats and journal prompts and stamped owls and the name of a fabulous chanel perfume, on a scrap notecard at my desk. 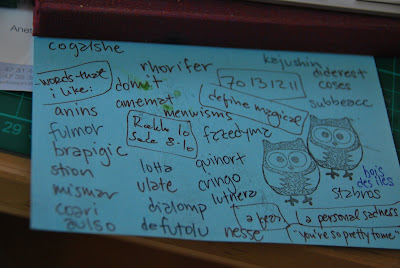 but, inspired by amanda's post nearly a month ago, i thought i'd make up some definitions for some of the ones that seem most fun.

cringo - i was going to say that it's what you do when you see a WTF Wednesday posting like this one, but upon further reflection, i think it's a curly-haired white person in mexico.

rhorifer -  a filter which clears away boring conversations like "do any of you ever use the highest temperature wash on your washing machine?" at dinner parties. i'm looking into a portable version of one of these.

domit - a small home constructed in the garden to attract hedgehogs.

menwisms -  the all-too-seldom clever utterance or observation by the male of the species. as in husband's statement last week while watching news of california wildfires on CNN that it so typical of americans to participate in global warming in such an extreme way.

brapigic - that itchy feeling you get when you've just taken off an ill-fitting bra.

mismar - to accidentally get caught in the waves and get the bottom of your pant legs all wet.

quinort -  an orangey-colored moss found at the foot of evergreens in the forest.  can be brewed into a healthy (if somewhat bitter) tea.

this reminds me of playing balderdash, that game where you make up funny definitions for words, at family holidays.
Posted by julochka at 2:04 PM