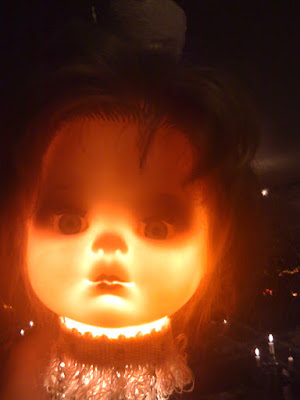 i sat my sister and her boyfriend down last week in a cool copenhagen bar (bankeråt) beneath this rather disturbing lamp and asked them to compose some balderdash definitions. here's what they came up with:

outoon - 1.) a group of soldiers stationed just outside of enemy territory (mq) OR 2.) short cartoon at the end of a movie (jason).

muragon - an object whose number of sides equals a prime number.

salki - an alcoholic who drinks a lot of saki.

sifflo - the rate at which flour flows through a sifter.

winest - the basket that's often found around a bottle of chianti.

tessive - the handwriting of someone who tries too hard with their handwriting.

getting these few definitions out of them was like pulling teeth. perhaps proving that you can't foist your obsession on others. and that this little venture requires inspiration.
Posted by julochka at 1:20 PM

Labels: getting others to do my work, this is fun, words

I was just commenting on the blog Neo-Plains Woman. She was talking about how she felt "weird" and was worried she was getting sick. I then noticed the w.v. was diesses. (disease that one dies from?) anyway had to pop over here quick and leave a note.